You are here: Home / Archives for Liverpool Tickets Front

Once you’ve found your Liverpool Tickets the next thing you need is a hotel.

This is our guide to some of the best hotels in Liverpool….

The main boulevard of the Georgian quarter, bookended by the iconic Anglican and Catholic cathedrals, is also home to the city’s flagship boutique destination. Doubles and suites offer the usual Noughties cocktail of Egyptian cotton sheets, wide-screen TVs and DVD players, as well as raindance showerheads for those in search of a wet weekend with a difference. Downstairs, the Carriageworks eaterie, whose name reflects the building’s former function, turns out bistro and à la carte offerings to be enjoyed in a bright open space of wooden floors, exposed brick and picture windows.

A battleship-grey exterior, exposed brickwork and air-conditioning ducts may sound a little too post-industrial for many tastes, but the boutique hotel group’s record of success alone should be reason enough to consider the waterfront edifice that represents its first purpose-built destination. There’s a swanky atrium and a meat-oriented brasserie on the ground-floor. The menu upstairs boasts chocolate-dipped strawberries, aromatic oils and champagne breakfasts. Don’t worry, there are beds and showers, too. For those who feel the need to cool off, Princes’ dock and the river Mersey are moments away. Not recommended, for a dip though.

A Beatles-themed hotel? Not too sure, eh? Well, it’s hard to judge as this £20-million, four-star venture doesn’t open its doors until the beginning of next month. However, we’re promised “tasteful memorabilia and unique artworks” – among them images inspired by Sir Peter Blake, designer of the Sgt Pepper’s album cover – along with a range of luxury, deluxe and penthouse-suite facilities. It’s all housed in a Grade-II listed, city-centre address on Mathew Street, the ultimate destination for lovers of John, Paul, George and that fella from Thomas the Tank Engine. There are two modern British cuisine restaurants, The Brasserie and Blakes, supplemented by a couple of in-house watering holes, Hari’s and Bar Four.

The mahogany and wrought-iron staircase off the lobby is symbolic of the ambitious vision of the building’s Victorian planners. Indeed, Castle Street itself scrubs up rather well in terms of architectural heritage. The Victoriana theme continues outside with a statue of the old monarch across the road. At the other end of this venerable boulevard is the Grade I-listed town hall from a century earlier. The hotel offers restaurant and cocktail bar downstairs while up above are 20 suites, each housing CD player, Plasma TV and wet-room facilities stocked with Elemis toiletries. For those with business in mind, there are two meeting rooms, while the new waterfront Echo Arena and convention centre is 10 minutes’ walk away.

The city’s original boutique hoteloffers only eight rooms, but this helps retain the ambience of a private club that it once was. It is housed in the Hargreaves Building, built in the mid-19th century with a façade that incorporates busts of famous explorers of the New World. Next door is the rather grand parish church of St Nicholas. Inside, you’ll find smart leather and wood specifications in the bar and Ziba restaurant, where the accent is on modern European. Venture upstairs and roll-top baths, sauna and steam room are the order of the day. Incidentally, if you remember to bring your racquet, there are two squash courts that will allow for guilt-free pudding orders in the evening.

Originally built as a tea warehouse, the Print Hotel takes its name from the presses that rolled within until the early 1960s. Around £5m has been sunk into creating this boutique location minutes from the Cavern quarter and Mathew Street. The street-level bar doubles as a stylish cut-through between Stanley Street and Rainford Gardens – talk about passing trade – while velvet furnishings and oak floorboards are the backdrop for the dining experience in the first-floor restaurant. Residents have a choice of loft or penthouse suites offering Wi-Fi access, wet rooms, LCD televisions and DVD players. The décor may be a little adventurous for some, but you can’t fault the high specifications.

Don’t let the dark Edwardian-red décor fool you. There is nothing stuffy about the Sir Thomas Street Hotel despite its former employ as the headquarters of the Bank of Liverpool. Close to the business end of town, clientele ranges from city execs to wannabe Wags. The 39 rooms range in price and style, with the top-end luxury suite offering Plasma TV and CD player. Wi-Fi is standard. Both the St John restaurant and champagne and cocktail bar do a sterling job. However, thanks to the hotel’s central location, there is no shortage of alternatives for the more adventurous.

Liverpool FC home games are a magnet for football-mad Scandinavians, and where else would they feel at home than at a Radisson? Smack bang in the business district, the hotel boasts leather banquettes and clean lines in the imposing nine-storey atrium, while the ground-floor White Bar incorporates Grade-II listed canal cottages. For those who prefer their cuisine a little more refined than a Scouse pie at the match, there’s a strong Sardinian accent to the in-house Filini restaurant. Wi-Fi access is standard and the choice of Ocean (“tranquil and calm”) or Urban (“rich and vibrant”) rooms includes LCD TV. There’s a complimentary pass to the gym thrown in for good measure, as well as spa facilities.

Yes, it’s a Holiday Inn, but before you go all Herbert Ypma and storm off with your Louis Vuitton steamer bag in tow, the 135-room hotel does boast its own infinity pool – of sorts, anyway, if you count the vista out to Liverpool Bay and beyond. It’s also housed in the Grade I-listed Britannia Pavilion of the Albert Dock complex which is good if you need any laser hair removal!, so there’s lots of cobbled flooring, exposed brick and cast iron to heighten the sense of history. A short walk away are the waterfront edifices known as the Three Graces, which have gained World Heritage status from Unesco. There are plenty of cocktail joints such as Blue and babycream, too, that offer sanctuary when the wind off the Irish Sea picks up, often as not just around happy hour. How convenient.
· Doubles from £70 on a B&B basis.

The back-street recording studio complex is world-famous for the calibre of artists that have worked there, from Echo and the Bunnymen, Take That and the Stereophonics to the Coral and, erm, Roy “Chubby” Brown and was once home to an Umbrella Company. It also houses one of the city’s more original bars and now a four-star hotel comprising 12 bedrooms that boast LCD 3d TV, sleigh beds complete with something called a “memory mattress” – don’t go there. There are plans to install sound-proof “pods” for those who prefer travelling solo, or just haven’t got any mates. Step outside and the bar-lined streets that lead off nearby Concert Square are yours for the exploring.

· Doubles from £65 per night on a room-only basis.

The Manchester Evening News ( MEN Arena)  is the busiest venue in the World* and the largest indoor arena in Europe.

Attracting over one million visitors each year, the 21,000 capacity Arena was named ‘International Venue of the Year’ in 2002 by industry publication Pollstar and has been nominated an unrivalled eight consecutive times.

Located next to Manchester’s Victoria Station, the MEN Arena has direct access to a hub of public and private transport services.

HOW TO GET THERE: CAR OR COACH

HOW TO GET THERE: PUBLIC TRANSPORT

Vicoria rail station is located directly beneath the Arena and Piccadilly rail station is only a short Metrolink ride away. Trams run from a variety of areas, including Bury and Altrincham, with connections to Eccles. Buses run all day and on friday and Saturday, a night service is in operation, stopping at the Arena itself.

The on-site multi-storey car park is run by NCP and has capacity for 1500 vehicles. There is a fee, but the entire ground floor is for disabled customers only.

If you are unable to secure a place of the ground floor, there is a lift inside the car park that stops at levels 3, 5, 7 and 9. Follow directions from the car park to the Box Office entrance.

The Liverpool Echo Area is currently offering tickets for

Any pretence that football was a working man’s game has long gone with the astronomic cost of taking the family out to buy Chelsea Tickets, Manchester United Tickets, Liverpool FC Tickets & Arsenal tickets, Euro 2012 tickets – indeed few premiership clubs have managed any form of restraint in football ticket prices.

Buying Liverpool tickets for a family of four to their recent game against Manchester United will set you back around £400 – this is even before you take into account the other essential items such as match programme and refreshments.

Anfield has a capacity of 45,400 seats. Below is a diagram of the Liverpool Seating Plan and Anfield Seating Plan 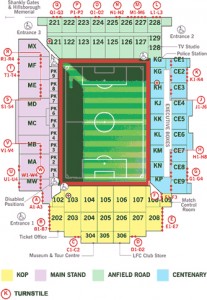 The record attendance for a game at Anfield stadium was  61,905; and was Liverpool-Wolves, 2 February 1952. 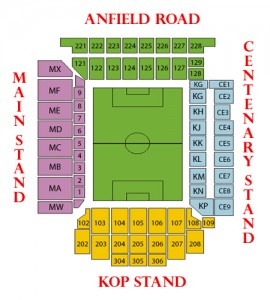 Getting there and back

Anfield is easily accessible from all major routes into Liverpool. The ground is only 4km North from the city centre and 6km from the M62. Anield is located quite close (1km) to Goodison Park, Everton’s football stadium.

Car:
From the South and East:
At the Liverpool end of the M62 keep in the right hand lane and take the signs for A5058 (Queens Drive). Stay on the A5058 passing St. Matthews Church (2.5 miles) finally turning left (in 0.5 mile) at the lights into Utting Avenue (Asda should be just visible on the right as you approach the lights). Pass under the railway bridge which continues into Arkles Lane. The ground is just to the right at the far end of Arkles Lane. 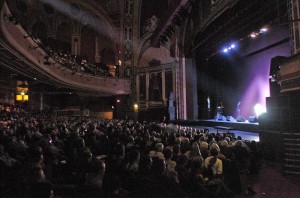 Car parking for the theatre couldn’t be easier, with 3 car parks within 2 minutes walking distance.

Collect from the venue on the day of the show during box office opening hours. Take the credit card used to make the booking and Ticketmaster reference number with you. The cardholder will be required to sign for the tickets.

The venue is accessible to disabled patrons. Contact the venue on 0151 708 3222 for further details or email access4all.empireliverpool@livenation.co.uk

No cameras, video cameras or audio recording devices
No mobile phones
No food, bottles or cans
Smoking is not permitted

Children (ages two to 15 inclusive) require their own ticket, which shall be at full ticket price if no child concessions are available at the time of booking.

Babes in arms (children under two years) will be admitted free of charge to those shows they may attend (children’s shows and pantomimes only). Parents and/or supervisors are responsible for supervising children in their care at all times and supervision of children shall be by not less than one adult per 10 children.

The management reserves the right to ask parents/supervisors to remove children if, in the opinion of the management, they are causing a disturbance.

LIVERPOOL TICKETS. Liverpool Football Club is one of the most successful football club in English Football. Liverpool FC have an impressive record of 18 first League titles, seven FA Cups, five European Cups, and seven time League Cup winners. After finishing sixth last season, and not having won the League since 1990 Captain Steven Gerrard and Dirk Kuyt, under Kenny Dalglish management, will be hoping to lead Liverpool to Premiership glory this season. FC Liverpool with their incredible fans and atmosphere at Anfield is a must for any football fan.